Earlier today, I had a chance to sit down with Michael Krysiewicz, founder of Famous Hands Flying to talk about his involvement with the Deaf Community and what he does to not only raise awareness, but to spread the knowledge of sign language to celebrities people look up to.

“My name is Michael Krysiewicz and I was born Deaf. I cannot hear nor speak and I wouldn’t have it any other way. I love being Deaf and being involved in the Deaf community as much as I possibly can. I have always enjoyed meeting celebrities…It’s actually a hobby of mine. So, I decided to create Famous Hands Flying to spread Deaf awareness and to share with the world the beautiful language of American Sign Language with a famous person’s hands!”
(Michael says before he started, there were people he wanted to meet and talk to, but he couldn’t because they didn’t know sign language. He wants to help them learn so others can communicate with them.)

I have been working with Michael for a few months now and he has vastly helped me improve my sign language and I’m very excited to keep working with him and learning more. When I started, I knew some basics. I knew my alphabet, I knew the signs for thank you, good morning, good night, and a handful of others, but since working with him, I have learned more and I continue to learn new signs each and every day.
It has been an amazing experience working with him and getting to know him,  and I would love to help him spread awareness of the Deaf Community. 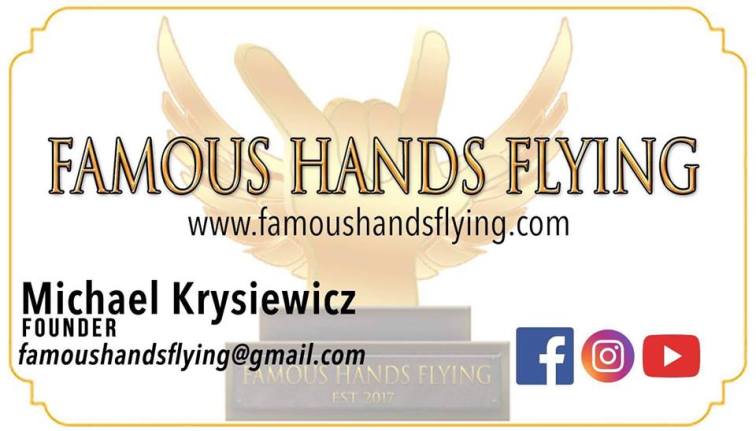 What is your favorite part of being involved with Famous Hands Flying?

Michael loves meeting celebrities, ever since he was a little boy and when starting Famous Hands Flying, he had found a way to combine two aspects of his life and raise awareness of the Deaf Community all at the same time.

What inspired you to start Famous Hands Flying?

When asked about what inspired him, Michael had directed me to another Facebook page – Meet Stars with Sign Language – another page with the same concept (meeting celebrities and teaching them at least the basics of sign language), but it was located in England and dealt with British Sign Language. He had looked around and hadn’t seen anything like that in America and he had messaged the owner of the page if he could set up his own and the owner encouraged it, wanting to see more done to raise Deaf awareness.

Who has been the most recent celebrity you’ve met?

Rick Hurst was the most recent person Michael has met and described him as always happy and really interested in being a part of Famous Hands Flying. He has met with Rick a few times and always loves seeing people who are interested in being a part of the Deaf community!
Rick Hurst is an actor. He known for his role as Cletus, Boss Hogg’s cousin in The Dukes of Hazzard (1979-1982). He has also acted in many TV shows and movies such as Steel Magnolias, M*A*S*H, In the Line of Fire, Earth Girls Are Easy, W.W. and the Dixie Dancekings, On the Rocks, and many more!
You can find out which celebrities have been a part of Famous Hands Flying by clicking HERE! 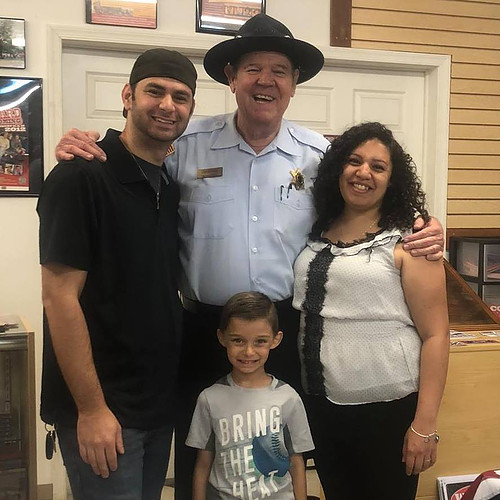 (Rick Hurst, Michael, and his wife and son)

What has been the biggest struggle about Famous Hands Flying?

Sitting down with Michael, he had said that the biggest struggle of Famous Hands Flying has been finding more celebrities, whether it be from lack of interest or finding funds to travel to them. On top of that, hearing back from them has been another problem, but he is still optimistic that more will follow.

What action would you like the readers to take away from this experience?

When I had asked Michael this question, he spoke about what he wished people would do. Michael’s wish is that everyone would at least learn the alphabet in sign language and not to be afraid to be social with someone from the Deaf community. He said that most of the time, people in the Deaf community are patient with people who are learning and it’s a good way to learn new signs as they’re usually happy to show you the sign if you’re spelling it!
He encourages everyone to learn the alphabet and practice all the time. “When you’re stopped at a red light, look at the signs and spell them out,” he told me. “Learning to sign isn’t hard, it just takes practice and people in the Deaf community will appreciate you trying to learn.”

Earlier in the interview, Michael had mentioned another author, Chris Barcomb, had been writing a comic book with a deaf character based on Michael himself! He has been excited about it and I had reached out to Chris about the project and just asked for a little bit about the project and I wanted to know what his inspiration was for the project. This is what he said:

The motivation behind the story came from meeting Michael Krysiewicz at a signing and him explaining the goal of Famous Hands Flying. While we were talking he also explained how it can be disappointing to deaf fans when they meet a hero or celebrity and are unable to communicate with them. Michael suggested maybe having a deaf character in the series, and it got me thinking this is definitely something we could do. The series is all about how being different is okay. So I started coming up with ideas for the story, but I also wanted to do something more. I came up with the idea using this issue to teach people sign language, so throughout the issue certain words will be highlighted and below the panels will be instructions for how to do the sign(s).”